Please sign-up in this thread if you're in Lux Arcana already and you'll be joining us in Darkfall New Dawn (it doesn't matter if you can make launch day itself).

The three week, completely free stress test launches at 2pm (Paris time) on Tuesday 28 June 2016. These three weeks are then followed by the "In Development" six to nine month phase. This is a pay to play phase - think of it as the beta - when the developers will be implementing their larger changes to the game.

If you've got any questions then ask them in this thread too! We'll do our best to answer them!

yesssss i may have a few new players interested in trying the game so 3 weeks free would be awesome for them to have a look and see what its all about. I'm glad we are going for new dawn as from the forum and they're vision for darkfall its what I think i would like darkfall to be.

I will definitely have a look at it, every game I have played with Lux has had a Darkfall discussion on mumble

Should also have my rig back home by then aswell

AKA 'The Tinfoil Avenger'

Hey Meajohl old man, i am comming in for the 3 free weeks, and lets see what happens later on

Sure...
(available from the second half of July)


what do you have in mind to obtain in short / long term?

[Reveal] Spoiler:
The crafter sits in his villa, contemplating past feats and accolades; wondering what his next adventure will be. A faint light glowed through the window, as it often does late in Agon's summer. Drops of condensation dripped down the silver mug filled with dwarven ale and collected upon the oak tabletop. It was one of the those auspiciously quite nights, and Ivinedra knew that something was about to happen. It was just too quite, as if it were the calm before the storm. After many nights braving the Sea of Horns around the island of Cairn, there was one thing the former sailor always feared; the quite.

Many times he and his companions sailed the high seas, often sporting drinks and songs of merriment however, when all were quite that mean the battle was about to begin. Ivinedra still had these feelings, even after the many years spent in retirement in Trinwood, and more often then not something occurred in these moments of "peace". Just in that moment, a raven appears on the windowsill, bearing a note. Ivinedra rushes to the window and hastily grasps the message. It reads:

Ivinedra knew that there was only one reason he would be summoned in such an official manner; a return of some variety was about to occur. He grabbed a quill without a second thought and quickly drafted a response:

"It has been many days since we have last met, I will be there upon the morn."

With that he dispatched the raven, collected his beginner sword and headed out the door. His destination, Ymir's Tear.

P.S. - We, as the collective, do not normally post such silly things.... but I'm bored and without a game atm.

And our plan, depending on our numbers, is to push for a holding ASAP at launch. So we'll be gold farming hard

Sounds awesome! Will be great to feel that amazing adrenaline rush again.
I'll have very limited time to play, even less with our twins born two weeks ago.
I'll see if I can find time to hop in and act as cannon fodder Maejohl: What is best in darkfall ?

Aydin: The open steppe, fleet horse, falcons at your wrist, and the wind in your hair.

Maejohl: Wrong! Franko! What is best in darkfall?

Franko: Crush your enemies. See them driven before you. Hear the lamentations of their women.

He that loveth his life shall lose it; and he that hateth his life in this world shall keep it unto life eternal.

Yes but I want Maejohlina in my bed again - tonight.

He that loveth his life shall lose it; and he that hateth his life in this world shall keep it unto life eternal.

Franko wrote:Yes but I want Maejohlina in my bed again - tonight. Lazy cat says sure why not.

will likely play, not sure yet how much though

Boomus wrote:Sounds awesome! Will be great to feel that amazing adrenaline rush again.
I'll have very limited time to play, even less with our twins born two weeks ago.
I'll see if I can find time to hop in and act as cannon fodder

Someone has to keep an eye on this one. Sign me up.

Someone has to keep an eye on this one. Sign me up.

I think i'll play during the free period and see how it goes.So X

Oh go on then

Maejohl, a question about the player rewards for the time spent on InDev:

'All left over meditation will be transferred to the Live servers.'

'If a crafting mastery was unlocked, it will be unlocked on the Live character.'

Considering these two quotes : does that mean that we have to choose our race and character wisely at InDev because we are forced to continue to play witch that character if we want to receive those rewards at launch?

Initially - yes, crafting will be the same. Here's what they've said about the big changes they plan for crafting though: 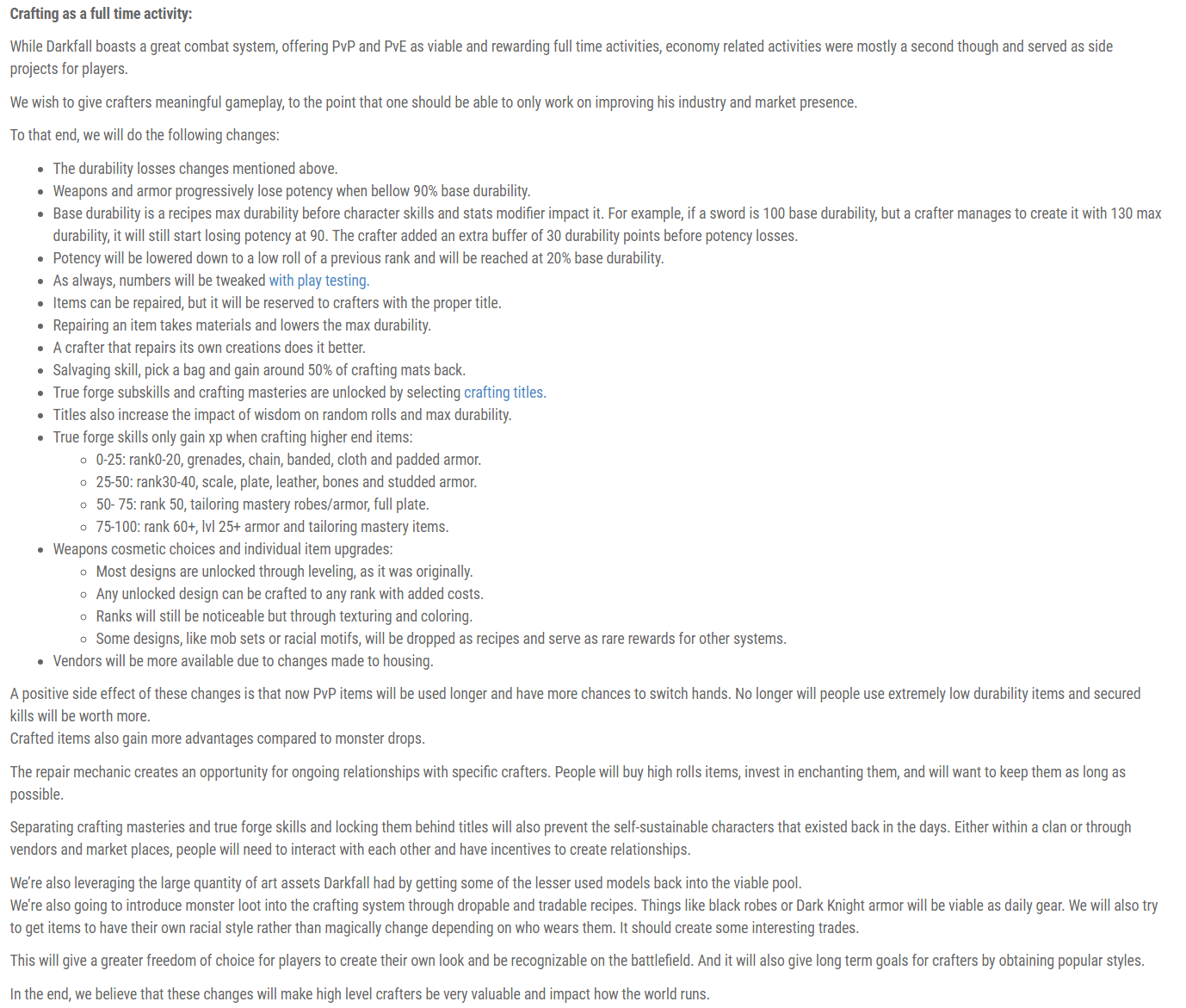 Here's a link to the whole article.

A) ALL unused mediation points carry over. BUT you can't insta-spend them - you can only use them to offline skill up over time. AND the devs reminded us about this:

"Remember that whenever a character gets sent back to the bindstone, they will lose at least 10% of their unspent meditation points once they reach a certain level of character progression.

The choice for players at the end of InDev is to either be strong enough to fight and win holdings at the end, or play it safe and ensure that meditation gets carried over. Some will chose land, others will chose to be able to play casually at Live launch."

B) If you unlock a crafting mastery in the InDev phase, it will stay unlocked (ie you don't have to pay gold to buy it again). BUT you will still have to craft from 0 - 100 in that craft to get to use the Mastery.

So yes - character creation will be important

This is the link Zedhar's talking about for those who don't know about what gets carried over to the actual launch after the InDev period enfds.
---

I realy would like to join this, but since i sold my house 7 months ago i have been "homeless"

. Now working on renovating my new house it might take another month or 2 befor i have decent playing time.

But definately yes if you let me.

Initially - yes, crafting will be the same. Here's what they've said about the big changes they plan for crafting though:

Shadeless wrote:I realy would like to join this, but since i sold my house 7 months ago i have been "homeless"

. Now working on renovating my new house it might take another month or 2 befor i have decent playing time.

But definately yes if you let me.

Once i find the time i will be joining ofcourse.

It's likely the ROA servers will still be down for a few days more after 28 June. So I'd guess the first few days will be busy.

After that, who knows!

I do know that DND devs are deliberately NOT marketing the game yet - it's not ready to be seen by people who don't already know Darkfall. So the actual launch in nine or so months' time will be - hopefully - very big.
---

Count me in if i can find the time

I only joined Lux this week and I have never played Darkfall before, but I'm interested in giving it a go!
"Magic always leads to trouble!" - Wise Old Elf

Old ally here, I'm in too and will be playing tomorrow :)

Damn I tried really hard to resist... but I failed.

Users browsing this forum: No registered users and 1 guest